With aquaculture on the rise, fish production of the Kingdom up 6 pct in 2018

With aquaculture on the rise, fish production up 6 pct in 2018 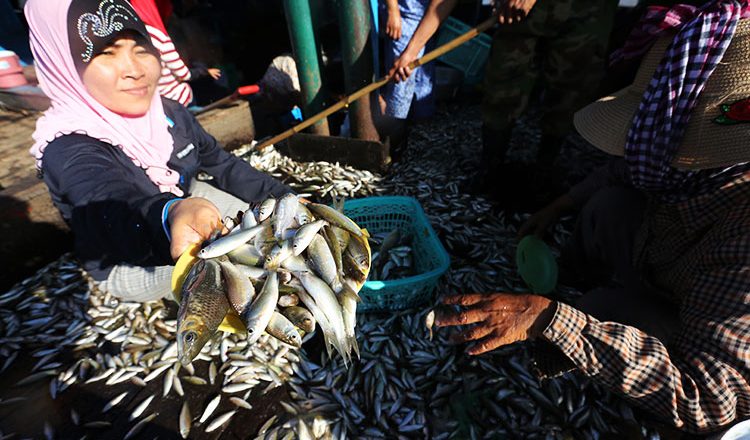 Fish production in the Kingdom rose to 910,153 tonnes in 2018, a 6.2 percent increase year-on-year made possible by a rapidly growing aquaculture sector.
.

Freshwater fish catches reached 535,005 tonnes, while saltwater fish catches amounted to 121,100 tonnes, according to the latest report from the Ministry of Agriculture, which also showed that production in fish farms equalled 254,048 tonnes.

The same report points out that 210 million breeding fish were produced in 2018, an increase of 5 million compared to the previous year.

Ministry of Agriculture Veng Sakhon highlighted the role fish plays in the local diet, explaining that it is an important source of protein, nutrition, and income for Cambodian people. He said the government aims to expand fish production to meet strong domestic demand.

“We cannot exploit our rivers indefinitely. The limit for Cambodia is 600,000 tonnes of fish a year, and last year we already caught more than 500,000 tonnes. This is why we are now focusing on developing the aquaculture industry,” he said.

With one hectare of land and enough water, a farmer can generate anywhere from $5,000 to $10,000 in revenue per year in the aquaculture industry, the ministry said, adding that the sector can play a significant role in national economic growth.

“In 2018, Cambodia imported 24,000 tonnes of seafood, mostly shrimp, crab, lobster and saltwater fish. Now, we have been able to reduce imports because we have expanded the aquaculture industry,” Mr Sakhon added.

However, he said, relying on more wild fish catches is not sustainable.

“To meet local demand, we need to produce more fish in farms,” he said, adding that “we need to conserve our resources. We need to reduce post-harvest losses.”

Mr Thombathu noted that currently more than 30 percent of fish is lost due to poor cold chain systems during handling and transportation.

“This is mostly due to inadequate infrastructure – including ice factories, landing centres, and collection centers, among others – and limited knowledge on post-harvest management such as the use of ice and careful handling and transportation,” Mr Thombathu said.

Regarding last year increase in fish production, he said it was mostly the result of a more developed aquaculture sector.
“Aquaculture is picking up speed in the country. We should not expect freshwater and saltwater fish catches to go up. They have already reached the maximum sustainable level.
“We need to maintain and sustain this level of wild fish catches. We need to save our fishery environment and resources for the future and put the focus now on aquaculture, which has great potential for growth,” Mr Thombathu said.